Europe – first climate-neutral container terminal based on hydrogen technology is being built in the Port of Duisburg.

Not only is the largest container terminal in the European hinterland being built in the Port of Duisburg – it is also the first terminal with completely climate-neutral operations using hydrogen, intelligent networking, and the ability to supply neighboring districts with energy.

On the site of the former Coal Island, duisport will construct the trimodal Duisburg Gateway Terminal (DGT) by 2023 together with its international partners Cosco Shipping Logistics, Hupac SA, and the HTS Group.

To implement the complete energy transformation of the world’s largest inland port, duisport and the Fraunhofer Institute for Environmental, Safety and Energy Technology UMSICHT have analyzed forward-looking technologies and developed customized models for Europe’s largest hinterland hub as part of the “enerPort” project.

In the follow-up project “enerPort II” (funding code: 03EN3046), the next step is now to install a sustainable energy system in the DGT that links renewable energies, energy storage, consumers and various hydrogen technologies. Key components for this are fuel cell systems and hydrogen engines for power generation as well as battery storage.

In the Duisburg Gateway Terminal, our operations will not only be state-of-the-art, digital and efficient, but also 100 percent climate-neutral.

“The largest development project since ‘logport I’ 22 years ago is a model project with a resonance far beyond the Port of Duisburg. It shows what the logistics and energy supply of tomorrow will look like, . . . 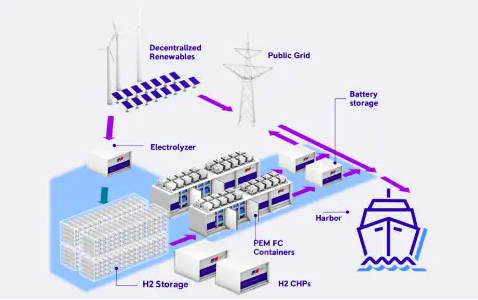 Hydrogen as an energy solution for inland ports: A microgrid based on renewable energies with hydrogen-powered fuel cells for emergency and peak power as well as hydrogen combustion engines (here a principle illustration) will meet the special energy requirements of port facilities. A similar solution is being created in the near future for the Port of Duisburg’s new container terminal with mtu hydrogen technology from Rolls-Royce