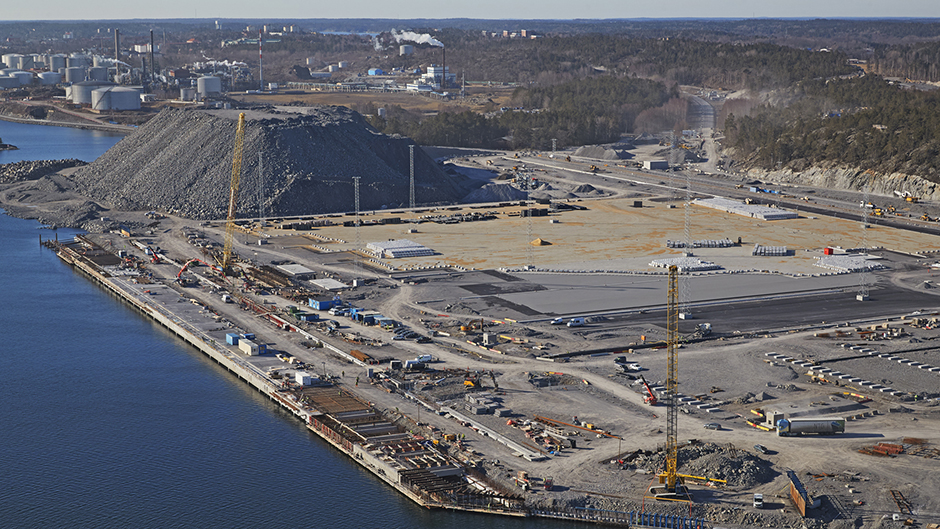 On 2nd May next year the Stockholm Norvik Port will be ready to receive the first vessel call, as that is the inauguration date for Sweden’s new freight port. The work to build the port is in full swing and section after section is now being completed.

With exactly one year to go, the work to complete the Stockholm Norvik Port is at full speed. Blasting of the final large rocky knoll at the port happened on 12th April. Around two-thirds of the blasted rock has been reused in the project, forming part of the foundations for the construction of the port esplanade, the quays, the railway embankment and concrete casting, among other things.

“It is fantastic that the countdown has now begun in earnest. This is an enormous project that has been very well-planned. We have a phenomenal project team on site who have kept the project on time and on budget. This is very reassuring,” says Thomas Andersson, Ports of Stockholm Managing Director.

Twenty-five percent of the port esplanade is now paved and ready, and the paved area is expanding at a rate of 1500 m2 of new paving daily. The first building, the customs inspection building, is ready. This is one of a total of five buildings at the port. Ports of Stockholm has also laid a new railway branch line to join the Stockholm Norvik Port to the main railway line running between Stockholm and Nynäshamn. Part of the new railway line will run through a tunnel that is estimated to be completed by the end of May.

“One year from now we will open the gates to the Stockholm Norvik Port, Sweden’s new freight port. It isn’t often that an entirely new port is built, so there is a huge amount of interest, particularly from customers, but also from politicians, the construction industry and the general public. This is the third port in a six-year period that Ports of Stockholm has developed and rebuilt. Through these projects we have gained both experience and a high level of skill as a commissioner, performer and recipient of this type of work, which is a great advantage in this type of unique project,” says Magnus Sjöberg, Ports of Stockholm Project Manager.