US ambassador to the UK Robert Wood Johnson visits Port of Liverpool and says America is committed to increasing transatlantic trade. 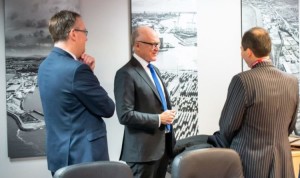 America’s ambassador to the UK has met with senior officials at the Port of Liverpool in the latest of a series of discussions over a new US-UK trade deal that could accelerate transatlantic trade.

Robert Wood Johnson was making his first trip to the UK’s only west-facing deep-sea container terminal where he was joined by several leading companies already involved in trade with North America.

In November Mersey Maritime, the representative trade body of Liverpool city region’s £4bn maritime sector, joined a high-level trade delegation to the US along with Government officials to discuss a possible post-Brexit deal.

During this week’s visit to the Port of Liverpool, Mr Wood Johnson was shown port owner Peel Ports’ £750m investment in the Liverpool2 container terminal. And he repeated the message that US President Donald Trump was keen to strike a trade deal with the UK.

He said: “It was an honour to visit Peel Ports Liverpool, a historic port with a very bright future. This was an opportunity to tour an amazing facility and meet with representatives from important transatlantic companies such as Cargill, ADM, ACL and Jenkins.

“President Trump is committed to striking a broad, comprehensive free trade agreement with the UK. Cutting-edge deep water ports like Liverpool2 will be the gateway for the increased trade, investment and jobs this agreement will bring both our countries.”

The visit comes days after the UK Government launched its consultation setting out its vision for Freeports. The consultation’s findings will determine which locations could become Freeports at the end of this year, with a view to those sites being open for business in 2021 . . . .

. . . . continue reading the article by Tony McDonough on the Liverpool Business News website